Airtel 4G LTE service provides high speed broadband connectivity to subscribers on the mobile network. With this service speeds of 24Mbps could be attained.

Airtel Nigeria is the third most-subscribed-to mobile network operator in the country with subscriber size of 51,496,256. Most subscribers of the network prefer it as a call carrier rather than for browsing. Nonetheless, the Airtel brand still packs enviable data bundles. But for those of Globacom, the data bundles offered by the operator betters others from the remaining major telecom operators. These data packages are well served to subscribers in different units, to the taste of different categories of subscribers.

Airtel Nigeria is also reknown for its tariff plans. The Airtel call packages are one of the affordable call tariff plans in the country. These subtle advantages when engaged with the convenience of an Airtel 4G LTE service births effectiveness.

Telecommunication operator Airtel Nigeria took the rear in the launch of 4G service in the country. The three other major telecom operators: Globacom, 9mobile (formerly Etisalat) and MTN launched their LTE services months before the Airtel brand did theirs — about eighteen months interval.

Indigenous brand Globacom premiered its LTE service in the cities of Benin, Eket, Jos, Warri, Yola and Zaria. This was followed by MTN and 9mobile (then Etisalat) in selective locations. Except for 9mobile, the major telecom operators in Nigeria launched their LTE service in cities other than the usual suspects: Lagos, Abuja and Portharcourt. Airtel 4G service was debutted in the city of Ibadan in early 2018. It however took months for an extension of this service to much larger cities like Lagos and Abuja.

Basically the speeds recorded by Airtel through its 4G service outrightly betters the ones from its 3G and 2G protocols. However these speeds are widely reported to be less swift as speculated and advertised.

Benefits of the LTE service

The foremost benefit of the 4G service from Airtel is an increased internet speed. You would no longer have to wait for lenghty minutes to download or stream a movie. A 500MB file should be downloadable in under 4 minutes using the 4G service.

You would also be effective and exigent in your dealings online; this is especially most necessary for workers and students who resort to the world wide net for various services. Corporate executives wouldn’t have to rue about losses emanating from slack communications.

Another benefit of Airtel 4G LTE is that it could be obtainable using internet devices. These MIFIs and dongles best give the users the necessary LTE experience. Airtel mobile WiFi comes with a free internet data, as well as an ability to be connected to 10 multiple devices. The free internet data given upon purchase of a MiFi differs from one gotten by switching to Airtel 4G.

These deluge of benefits speaks how important and beneficial the 4G service from telecom operators, and particularly from Airtel Nigeria has risen to be.

The Nigerian operations of Airtel Africa early this year in March, acquired a 10MHz block of spectrum in the 900MHz band. The operator said it paid a total of $94 million for the spectrum it purchased from Intercellular Nigeria Limited. This in addition to some bands in the 1800MHz frequency it initially acquired would enable more devices stand compatible for the service. These frequencies are also popular ones, as most phones shipped to the country are supportive of them.

Before undergoing the process of SIM swap, mobile number portability, or any other process that would require you to change a SIM card, be sure to back-up your contacts. Upgrading an Airtel SIM to 4G requires SIM swap, and consequently, the need to back-up contacts stored on the module. 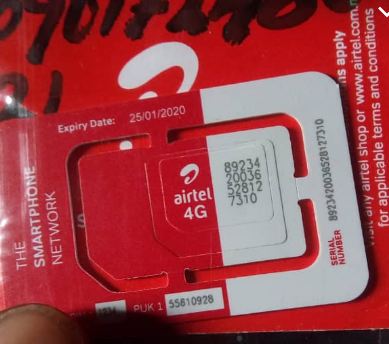 Due to the nascent nature of the 4G technology in Nigeria, several telecom operators, with Airtel inclusive, constantly do expand their coverage. A list of Airtel 4G locations are enlisted in an independent page set for it.

Airtel 4G devices like the Airtel router/MiFi separately have their bundles. These bundles which could be found here are only usable on these special devices. However, other data bundles could be usable with smartphones and computers on the courier’s 4G network.

Upgrading to Airtel 4G LTE presents a better browsing experience, which is necessary considering the dilemma cloaked as poor network performance usual of carriers in the country.